The Astiland AS-VL+ is a multifunctional vein redness removal and lipolysis laser machine that is particularly effective in spider vein removal, onychomycosis treatment, laser liposuction, laser pain relief physiotherapy, and is ideal for salons and doctors to provide vascular removal, Onychomycosis, liposuction solutions to their clients.

Vascular is caused by the exposure of capillaries and veins, and thinning of the skin is also a cause. 980nm vein removal laser machine uses a wavelength of 980nm to remove Vascular and is effective on all causes of capillary exposure. During the treatment, it also stimulates the regrowth of collagen in the skin, increasing the thickness and density of the skin. As a result, the Vascular disappears and the elasticity of the skin increases. The porphyrins in the vessels absorb the 980nm laser, causing the vessels to coagulate and then disappear. The 980nm laser does not damage the skin at all.

How it works
The 980nm diode laser system is based on the thermal effect of the laser, which is divided into 4 stages.
1. The laser is converted into heat.
2. The heat is transferred to the vessel wall.
3. Thermochemical action on the tissue components of the vessel wall.
4. The walls of the vessels are destroyed. 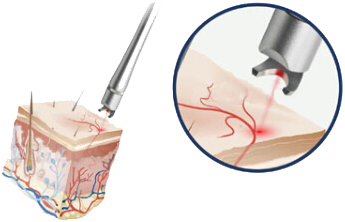 Nail fungus is a fungal infection of the nail. It is the most common disorder of the nail and accounts for about half of all nail abnormalities. This condition may affect toenails or fingernails. It is estimated to affect nearly 10% of the general population, with the incidence rising to nearly 30% in patients over the age of 60. 980nm laser has shown excellent results in removing nail infections, demonstrating safety and effectiveness. It provides excellent treatment results and the 980nm nano laser has deep penetration to ensure effective treatment through the nail without affecting other surrounding structures.

The 980nm laser breaks down the cell walls of fat cells, creating holes in the cell walls to allow the cytoplasm to escape, which is then pumped out of the body with a patented fine needle or drained through the lymphatic system.
Compared to traditional vibrating liposuction machines, laser lipolysis is a shorter operation with less damage, less bleeding and no fear on the part of the patient due to liposuction. The wound is only 2mm, invisible after healing, and ultimately results in weight loss. In addition, the laser stimulates collagen, which also results in skin tightening and wrinkle reduction.

The Laser Principle for Pain Relief

The 980nm laser is selected for treatment by complete skin and pain relief. There is no irreversible damage to biological tissues when treated with the laser, only a series of physiological and biochemical changes such as anti-inflammatory and analgesic, wound astringency, desensitization, and adjustment of body functions. Laser therapy is a universal method of treating muscles, tendons, ligaments, joints, connective tissue as well as bone and skin tissue. Laser treatment is easy to apply, non-invasive, painless, drug-free, and has no harmful side effects. 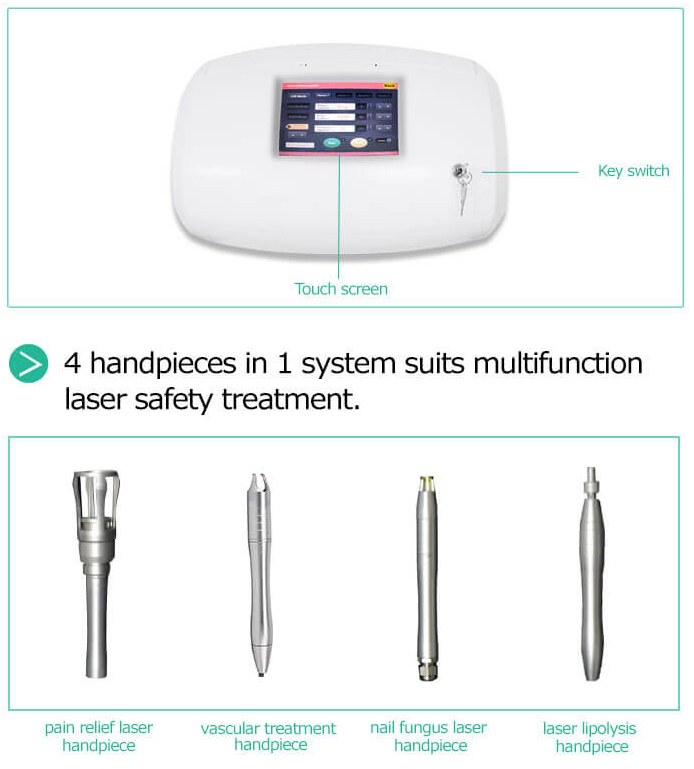 1. The 980nm laser is the optimum absorption spectrum for porphyrin vascular cells.
2. The laser beam is focused in the range of 0.2-0.5mm in diameter, thus allowing the energy to reach the target tissue in a more concentrated manner, while avoiding burning the surrounding skin tissue.
3. The laser stimulates the growth of collagen in the dermis while the blood vessels are being treated, increasing the thickness and density of the epidermis so that small blood vessels are no longer exposed, while the elasticity and resistance of the skin is significantly increased.
4. A system based on the thermal action of the laser. Transdermal irradiation (penetration of 1 to 2 mm in the tissue) causes selective absorption of hemoglobin by the tissue (hemoglobin is the main target of the laser). 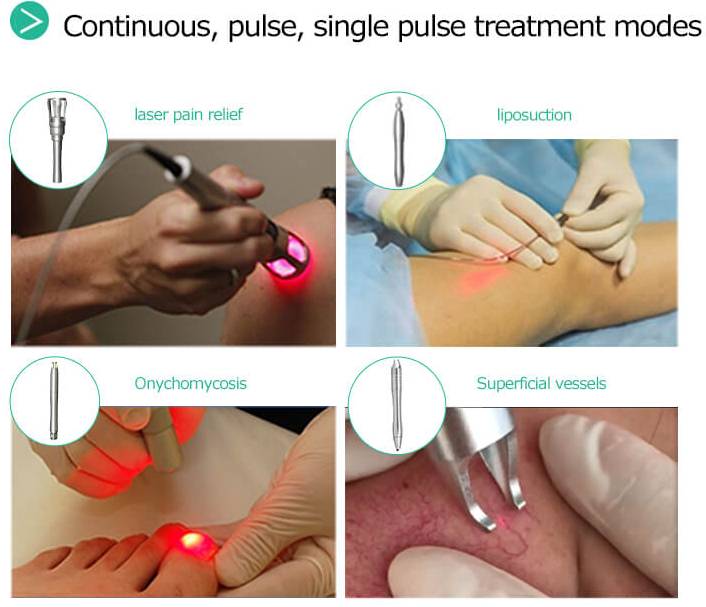